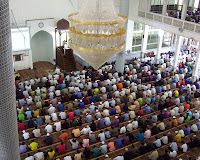 Every soul shall have a taste of death: And only on the Day of Judgment shall you be paid your full recompense. Holy Qur'an / 3:185

69. Think not of those who are slain in Allah's way as dead. Nay, they live, finding their sustenance in the presence of their Lord;
170. They rejoice in the bounty provided by Allah. And with regard to those left behind, who have not yet joined them (in their bliss), the (Martyrs) glory in the fact that on them is no fear, nor have they (cause to) grieve.
171. They glory in the Grace and the bounty from Allah, and in the fact that Allah suffereth not the reward of the Faithful to be lost (in the least).
172. Of those who answered the call of Allah and the Messenger, even after being wounded, those who do right and refrain from wrong have a great reward;-

173. Men said to them: "A great army is gathering against you": And frightened them: But it (only) increased their Faith: They said: "For us Allah sufficeth, and He is the best disposer of affairs."

174. And they returned with
Grace and bounty from Allah. no harm ever touched them: For they followed the good pleasure of Allah. And Allah is the Lord of bounties unbounded.

175. It is only the Evil One that suggests to you the fear of his votaries: Be ye not afraid of them, but fear Me, if ye have Faith.

176. Let not those grieve thee who rush headlong into Unbelief: Not the least harm will they do to Allah. Allah.s plan is that He will give them no portion in the Hereafter, but a severe punishment.

177. Those who purchase Unbelief at the price of faith,- not the least harm will they do to Allah, but they will have a grievous punishment.

178. Let not the Unbelievers think that our respite to them is good for themselves: We grant them respite that they may grow in their iniquity: But they will have a shameful punishment.

179. Allah will not leave the believers in the state in which ye are now, until He separates what is evil from what is good nor will He disclose to you the secrets of the Unseen. But He chooses of His Messenger. (For the purpose) whom He pleases. So believe in Allah. And His apostles: And if ye believe and do right, ye have a reward without measure.

180. And let not those who covetously withhold of the gifts which Allah Hath given them of His Grace, think that it is good for them: Nay, it will be the worse for them: soon shall the things which they covetously withheld be tied to their necks Like a twisted collar, on the Day of Judgment. To Allah belongs the heritage of the heavens and the earth; and Allah is well-acquainted with all that ye do.

181. Allah hath heard the taunt of those who say: "Truly, Allah is indigent and we are rich!"- We shall certainly record their word and (their act) of slaying the prophets in defiance of right, and We shall say: "Taste ye the penalty of the Scorching Fire!

182. "This is because of the (unrighteous deeds) which your hands sent on before ye: For Allah never harms those who serve Him."

183. They (also) said: "(Allah) took our promise not to believe in an apostle unless He showed us a sacrifice consumed by Fire (From heaven)." Say: "There came to you apostles before me, with clear Signs and even with what ye ask for: why then did ye slay them, if ye speak the truth?"

184. Then if they reject thee, so were rejected apostles before thee, who came with Clear Signs, Books of dark prophecies, and the Book of Enlightenment.

185. Every soul shall have a taste of death: And only on the Day of Judgment shall you be paid your full recompense. Only he who is saved far from the Fire and admitted to the Garden will have attained the object (of Life): For the life of this world is but goods and chattels of deception.

187. And remember Allah took a covenant from the People of the Book, to make it known and clear to mankind, and not to hide it; but they threw it away behind their backs, and purchased with it some miserable gain! And vile was the bargain they made!

188. Think not that those who exult in what they have brought about, and love to be praised for what they have not done,- think escape the penalty. For them is a penalty Grievous indeed.

189. To Allah belongeth the dominion of the heavens and the earth; and Allah hath power over all things.

190. Behold! in the creation of the heavens and the earth, and the alternation of night and day,- there are indeed Signs for men of understanding,-

191. Men who celebrate the praises of Allah, standing, sitting, and lying down on their sides, and contemplate the (wonders of) creation in the heavens and the earth, (With the thought): "Our Lord! not for naught Hast Thou created (all) this! Glory to Thee! Give us salvation from the penalty of the Fire.