What I have learnt in forty years:"Four Phrases" 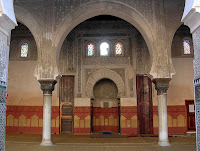 Let us remember the famous scholar Imam Al-Nursi’s quotation from Mathnawi al-Nuriya: “I have learnt only four words and four phrases in forty years of my life and thirty years of my education”.
We mentioned the four words, which are point of view, intention, significative meaning and nominal meaning in the previous article. (For further details on the first words, refer to the article “Four Words”). This week we’ll read on
the same quotation but pass on those following phrases. Imam Bediuzzaman states the first of four phrases as below:

1. ( ): "I am not the owner of my self, my being."
People seem and think that they are strong and powerful, sometimes they are so self-confident that they think they can challenge the universe using their thousands times smaller than others compared to massive planets in the huge universe. However this so-called powerful king understands his weakness at the time of an illness or at the dead bed. We, as human beings, are inclined to be ignorant and disloyal while we think we are young and irresistible. What we experience is just the vice versa. A reality that we are not always aware of is that we are literally weak. We are not able to stop even the smallest creature to come into our body. A microbe or a virus can easily demolish the body of a Hercules-like body-builder huge man. There is not a real power in man’s hand other than what God gives. If he does not allow us to do anything, we are incapable of doing anything. Even if humankind has developed a lot of high-techs we are still impotent to get over a minute being to take over our body. Let me remind you of those days when people were extraordinarily worried about swine flu or bird flu. I was in London and remember those gentlemen in necktie and black suits with fast cars. Seven bedroom mansion owners or a millionaire, they were all afraid. Their wealth and power didn’t work as it didn’t to the Namrood in the past.

We are not doing anything else except for carrying food to our mouth, just swallowing couple of times and we’re done. What happens afterwards? How it goes and helps body? What kind of a process is it? Many people do not know the process but eats and lives. There is somebody who knows the food, who knows our body and who created both. He is Allah (‘azza wa jalla). He is the owner and we are ‘abd (servant).

No smart man can deny that he will die sooner or later. His family will and so will his friends. As trillions of people have died up until now, we will do it one day. And no one wants a miserable ending. If we want a good end, we should live accordingly. We should follow the teachings of the Prophet Muhammad (SWT).
Death is such a good reminder that if one of our friends die, we check out ourselves and try to correct deeds that we are in.
Bediuzzaman says “If you want a friend, the Qur’an is enough for you. If you want an enemy, your nafs (self) is enough for you. If you want an advice, death is enough for you.”

He is Wahid. This sentence significantly shows us that there is no other deity worthy of worshipping other than Allah (SWT). He is the One. He is the only Actor and the Creator. This is extremely important for our life, spiritually and worldly.

4. Ana:
“We did indeed offer the Trust to the Heavens and the Earth and the Mountains: but they refused to undertake it being afraid thereof: but man undertook it he was indeed unjust and foolish”. Many interpreters wrote various meanings for “trust” or “amanah” stated in the verse. Some scholars said that the amanah given down to mountains are “halal- haram” while other mufassirun said they are “faraiz”, some others commented that it is the Qur’an.
Bediuzzaman Said al-Nursi says that, in this century, one of its meanings of the “amanah” is the Ana. Ana is your self, combination of your capacity, skills, potential.
We use Fahrenheit or miles to measure. We do use latitude and longitude. They do not really exist but in order to understand the size of the world and to relate the distance on earth, we consider them as if they exist. These are not real but are accepted by us and are relative measurements. Ana is a measurement, too. We have some power and knowledge to maintain our life. They are not real. Our ‘ilm (knowledge) and power are not ours. They are not from ours. They are relative.
People say they have houses. At the end of the day, if they die what happens to their houses? Are they still their house?

We say that the house is ours but it’s not actually our. Millions of people said the same thing and died before us. We know that everything on earth is all Allah’s wealth.
We educate and raise children. And we say we are educating, training, and raising them. What we can infer from all these (power, knowledge, ownership, lordship) is that we are not powerful. If we were, we would be getting over every problem we face. We have still very little knowledge of the universe while we do have very few things compared to what we do not. We do not have house but hire in a certain amount of time. If it was, we would have them forever.

These all are the measurement for us to understand the infinite power and knowledge of God, wealth of Him andrububiyah (Lordship) of Him.
Seeing the signs of these attributes on ourselves we can understand it to a certain level. If we consider our attributes as your own, this is the misuse of amanah. Understanding what amanah (ana) is, if we get to know who Our Lord is, why we should praise and worship him, how we should spend our life according to his commandments, we would be using this amanah in the best way.
Ana is like the Officer at the call center. If he directs the calls to another line everything goes wrong. Officer’s responsibility is just to receive and direct.
If “ana” works wrong, everything goes to the wrong way.
“Ana” is the key factor in human’s spiritual improvement. If one educates his “ana”, he may become the “‘abd” of Allah.If not, God forbids, he may become like Pharaoh.
May Allah make us understand the Qur’an and educate nafs for the sake of Allah (SWT). Amin.
Etiketler: forty years, four phrases, four words, Islamic education, life, Quranic study
Email ThisBlogThis!Share to TwitterShare to FacebookShare to Pinterest