A Dedicated Life, A sacrificed Body, An Elevated Soul 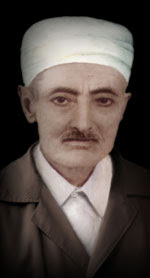 It was just after the fall of the Great Ottoman Empire that there were gloomy days and nights many people were hesitant to struggle against. If they attempted to take any action for the sake of Islam, they were punished harshly.

Ustad Bediuzzaman Said Nursi (also known as Imam al-Nursi) and the Noor students around him were resisting intellectually. During that time, it was hard to find men willing to struggle. Thousands of innocent people were beheaded upon newly established government's rules. Thus so many were desperate to do anything but wait their end. However he was hopeful and looking ahead to the future with great determination. They were trying to save Muslims, especially the youth of the future, from the fataan (trials) of the end of time which were awaiting them.

Of course it was not easy to do that. For the sake of
preserving and spreading the truths of Imaan (belief) and tenets as well as the shaa’er (symbols) of Islam, they were accused of founding an alleged illegal community, being in favour of shari’a and being involved in activities to change the basics of the state (Turkey) aiming at re-building the Islamic khilafah. Actually what he did was very simple: To write a book. But the problem is that the book was about the Qur'an. Some couldn't bare this, tortured the writer and his followers and did their best to stop this peaceful and silent upheaval.

It was an interpretation of the Qur'an and people were enlightened by the message of tranquility and teachings of secure life within Islam. After reading each of the risalah (small chapters of his collection), thousands of people found their guidance and saved their imaan at the time turbulence and lack of Islamic unity. The followers of Imam Nursi copied the risalas and spreaded all around Turkey and the spiritually Muslims got strengthened.  The hero of sufferings, the great figure of the time, Ustad Bediuzzaman Said Nursi describes the outline of his life in his biography:

“I have never tasted worldly pleasures in my eighty years of life. Each and every year of my life passed through in the battle fields, dungeons of exile or the prisons of my country and the courts of the state. They haven’t left any pains that I didn’t suffer from and any tortures that I didn’t agonize. I was treated in martial courts as if I was a mass murderer. I was sent into exile from one region to another like a vagrant. I was prohibited from communication for months in countryside prisons. I was poisoned so many times and was exposed to many sorts of insults." [29]

Ustad’s students shared his sufferings and were exposed to similar pains in the same cause together with him. One of them was the closest student to him in pains and sufferings. He was his pioneering student and (to-be-successor) Ahmed Husrev Altınbaşak.

Husrev Altınbaşak was tried with Ustad Bediuzzaman and other Noor students in Eskisehir, Denizli, Afyon courts. When they were poisoned together with Ustad in Denizli Prison, they were all able to survive except one of the precious Noor students. Hâfiz Ali (May Allah’s mercy be upon him), who became a martyr losing his life in the way of Allah. Things seemed to calm down. But even after Ustad Bediuzzaman passed away, Husrev Efendi’s sufferings didn’t decrease but continued.

SPREADING THE WORD
After new allegations and courts he was placed in prison again. Under these unbearable circumstances, Bediuzzaman Said Nursi compiled his treatises from wherever he was exiled, imprisoned, or held under custody. He used to send these Noor treatises in the form of letters to Husrev Efendi who was in the centre of their Islamic service, Isparta. Under control and supervision of Husrev Efendi, these works were being hand-duplicated in the original scripture. Noor students were hand writing the treatises and these were then being copied in duplicating machines. Afterwards, they were sent to many other places in Turkey. Letters of many Noor students around the country were transmitted to Ustad via Ahmed Husrev Efendi. Most of the
time responses were written by him upon Ustad’s desire.

Imam Said Nursi names Ahmed Husrev Efendi as a “Rose Factory” [30] and tells the duty and the place of him in the management of Noor Service as follows: “We congratulate Husrev and pray for his success in his duty of correction, distribution, supervision, communication as well as spreading the Noor (treatises) and educating students around him. In addition to his important duties, we behold the beauty of his pleasant and brilliant handwriting in many copies of the Noor treatises.”[31]

“Husrev’s constant wonderful, pointed and useful ideas were always valuable in the service of the Qur’an.” [32] Bediuzzaman Said Nursi authorized Husrev Efendi to make changes if necessary, which he did not give to anyone else among his students, and showed us Husrev Efendi’s vital role in the service of Noor saying “Husrev has the authority to amend, replace and improve any parts that he regards improper.” [33]

When poisoned in Emirdag, Ustad Bediuzzaman confirmed this point once more in his reply to Husrev
Efendi’s letter where Husrev Efendi wanted to die on behalf of him:

“Husrev, the hero of the Risale-i Nur, sincerely and seriously desires to die in exchange for me and to become ill on behalf of me. I do declare: This is not the time of compilation, it is of spreading. Your handwriting to spread the truths is more valuable than mine. For the service of Noor, your life, too, is more precious than mine. Were I be able to do, I would give years from my life and health to you with pleasure.” [34]

Husrev Efendi's Life
Ahmed Husrev Efendi was born in AH 1315 / AD 1899 in Senirce village, Isparta. His father, Mehmed Bey, was the grandson of one of the last Isparta governors of the Great Ottoman Islamic Empire, Haci Edhem Bey. The forebears of his father who are among Isparta’s notable
men, are known as Green Turbans and their family tree dates back to Prophet Muhammad’s (PBUH) companion Sayyidina Abu Bakr (May Allah be pleased with him).His mother’s family also belongs to noble forebears who are the descendants of Imam Hussain (May Allah be pleased with him). The family was known as “Hafiz Qurras (The ones who are both hafiz and reciters in 7 basic styles).

Seeing a meaningful dream, Husrev Efendi visits him when Ustad Bediuzzaman was exiled in Barla in 1926. From then on, he served as an important senior student, an advising friend, an assistant to his Ustad and the most important element of the service of Noor.

While introducing his senior student Husrev Efendi, who became noted in the Service of Noor, Ustad gives his name both as a model and measurement to all his students from madaaris all around Turkey.

He pays tribute to his other students by saying Husrev Efendi’s name. For example, late Hasan Feyzi was called “Denizli’s Husrev” “Aydin’s Husrev was Ahmed Feyzi Efendi. Mehmed Feyzi Efendi who satisfied Ustad by his successful service in Kastamonu was honoured with the name “Little Husrev”. He proudly used his title in the letters he wrote and finalized them with the signature of “Little Husrev Mehmed Feyzi” The title of Nazif Celebi from Inebolu was “Husrev of Inebolu”;”Second Isparta” was the title of Inebolu as well. The Writer Osman of Isparta was similarly “The Second Husrev”. Ceylan Agabey, who was the servant and driver of him during the last years of Ustad’s life, was a “Very Small Husrev” in the eyes of Ustad Bediuzzaman Said Nursi. Furthermore, First Tahir was “an Exact Husrev” for Ustad.